Sex, drugs and missing money …   Private Investigator Richard McCord discovers what appeared to be a simple case quickly explodes into multiple murders, a Mexican drug cartel connection, temptation from a vivacious exotic dancer, and maybe even a serious relationship with a beautiful therapist.

McCord is never one to walk away from danger, but he is now struggling with his emotions. At times, the old comfort of a bottle of booze seems mighty inviting, as he walks a thin line of vulnerability.  Will he stay strong ─ or give in to his weaknesses and end up hating himself? 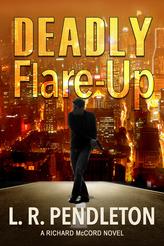 Richard McCord, retired attorney, turned private investigator, soon after being hired by wealthy dentist, Frank Howard, to investigate missing money and drugs, he begins to wonder if the challenge this time might be too much, not only for his professional life, but especially for his love life.  McCord is attracted to Jessie Conway, the half-sister of one of the suspects in the case.  While McCord is streetwise and hardened, having been a Southern California deputy distract attorney who left the DA's office due to serious drinking and womanizing, he is not totally prepared for Mandy Freidman, dental assistant to Dr. Howard, and part-time exotic dancer, who seems to enjoy playing sexual mind games with McCord.  Is he about to sabotage his relationship with Jessie Conway and turn to the mysterious Mandy Freidman?  The maze of intrigue expands greatly with murders and drug trafficking by the local Mexican drug cartel.  Richard McCord's longtime friend, Lieutenant Carlos Hernandez heads up the San Gabriel Valley Drug Task Force, and McCord brings him into the case.  McCord is convinced someone is out to kill him, or to frame him for murder, and he is determined to find answers, that is, if a bullet does not stop him first!

"Deadly Flare-Up is a rollercoaster ride of murder, drugs, and intrique!

In Deadly Flare-up L.R. Pendleton has created a first class sleuth in Richard McCord. In a case that turns deadly almost from the start, Richard McCord finds himself having to unravel a deadly web of intrigue and murder amid the Southern California drug trade. From his first meeting with a dead thug's sister to a deadly showdown with a full blown psychopath, McCord proves he is up to the job. This one is a must read my friends!" ~Billy P. Craig

Available in Print, Kindle, and Audible at Amazon.com